Welcome to my EKO-FILMI blog. It’s a space where I share my experiences, resources and recipes in the field of eco-processed film. In 2020 I got a grant from the Finnish Cultural Foundation that enables me to conduct research on eco-processing film with Finnish plants and berries and expanding the experiments around eco-reversal processes. I will be writing about these experiments on this site.

I started exploring with eco-processed b&w film in 2017, after developing my first 16mm films at the University of Regina’s Film Department’s darkroom and learning about the toxicity of traditional film chemicals. I decided that since eco-processing is an option, it would be something I could start including into my practice right from the beginning. My MFA film “Magdaleena” was my first eco-processed (caffenol+grapenol) film, and I have continued on this path ever since.

There’s a lot of inspiring research and innovation happening in the field of analog film and darkroom techniques, so it was easy for me to learn the ropes by following other artists that had already created different types of formulas and recipes for eco-processed film. I’ve never been good with chemistry or numbers, so it has been quite amusing to play around with these areas of interest that I’ve condemned myself to be bad at.

I started my journey with reading about the Eco-process from online and the book “Experimental Filmmaking” by Kathryn Ramey. Another instrumental experience was attending the Independent Imaging Retreat, which is an annual week-long workshop that takes place at Canadian filmmaker Philip Hoffman’s farm in rural Mount Forest, Ontario. There I met other eco-film enthusiasts, and deepened my understanding towards the form. I would also recommend the book “Process Cinema” by Scott MacKenzie and Janine Marchessault as a resource for those interested in analog methods and eco-processes in film.

It all started with caffenol, but nowadays there are several alternative recipes available and different eco developing agents can be used, such as berries, potatoes, dates, flowers, herbs, tea, wine or beer, you name it. Innovators in the field of eco-processing such as Canadian Moving Image artist Dawn George and Oxford based filmmaker Karel Doing have collected knowledge and written about different kinds of recipes in their own blogs. I’ve found the knowledge that exists in the analog film community very helpful and inspiring. It feels like we are all trying to find a piece or two of the bigger puzzle and as we find them there is a collective way of sharing and adding these pieces together. 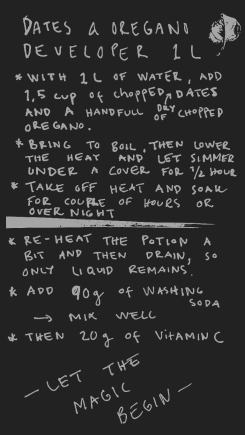 At this time I am using a mixture of dates and oregano as my primary developing agent. I found this mixture powerful for developing high contrast b&w 16mm film (Kodak 3378) with almost the same developing times as one would use when using traditional chemistry and the end result of the film image is great! These are also ingredients that can be found year-round while shopping for my other groceries in Montréal. The fun part though, is to keep looking for other possible star ingredients when it comes to developing agents, so I keep my eyes open. However I have discovered that oregano-date-potion tastes delicious after a month or two in the fridge, so I might keep drinking it even if I abandon it as a developer.

The eco negative film development process is quite simple. You mix your developer and soak your film into it, then use water as a replacement for a stop bath and finally either use a traditional chemical FIX or alternatively replace this with a water/salt solution  (takes a couple of days) and Voilà you have a negative film image.

However if you are looking to develop your film as a positive, you need to use a reversal process and this is when things get tricky.

Note: Always use gloves, and protective clothing, mask (preferably a respirator) and safety glasses when working with eco reversal. Combining hydrogen peroxide and vinegar creates a solution that can harm the skin, eyes, nose, throat, and lungs, if not protected properly.

The first documented explorations with the eco-reversal process (that I am aware of ) where published by Portuguese artist Ricardo Leite in 2013. Those who followed, including myself, have used Leite’s research and “caffenol-c + citric hydrogen peroxide bleach” recipe as inspiration and guidance. I started testing the eco-reversal process with this recipe in the summer of 2019. At the time I used a high contrast 16mm b&w film (7363), which was recently discontinued by Kodak. First I got some very dark and almost abstract results. Then, after focusing more on the temperature of the eco-bleach, I got increasingly better results. However, the abstractions and unreliabilities caused by the hand squeezed lemons and limes made me want to alter the recipe in order to achieve more trustworthy results. I was also having a hard time finding strong enough hydrogen peroxide from the local pharmacies (highest ones being 6%), and ended up testing the recipe with hair products (that were 9% vol30), which led me to having the best results at that time. However the use of hydrogen peroxide hair products was problematic, because they were not a good ecological alternative and I felt like I was moving backwards in my process.

I started looking into alternatives and found the food grade 35% hydrogen peroxide, that is relatively hard to find, but would be a real environmentally friendly alternative. I bought a couple of 450ml bottles of the food grade hydrogen peroxide from a local natural foods store in Montréal. This stuff is quite powerful when not diluted, and I made the mistake of not wearing gloves when touching the bottle and got a “eco bleach burn” right away on my finger, so I recommend gloves to everyone dealing with this product.

I also contacted filmmaker Dawn George after seeing her film “Anthology for Fruits and Vegetables” (2019). This wonderful film has perfectly eco-reversed images, and I was looking forward to hearing more about her process and her experience. The magic word that made a major impact to me and my process was vinegar. Instead of using lemon or limes, George had found vinegar to be a better alternative. After testing the new recipe I got from George, I finally got more satisfying results! After doing some more finessing and testing with this recipe, I will add my recommended recipes on this blog for everyone to see and share.

Summer 2020 was dedicated to testing and finessing the Eco-reversal process for my own needs. The recipe I got from Dawn George acted as the base for this research. I wanted to develop a recipe and method that would work each time in a similar manner, and this is why I needed to try different combinations, developing times and temperatures. It’s always good to note that even when the eco-bleach recipe works perfectly for me, it might need some customizing when it comes to your individual needs. My process is relying on the fact that I’ve gotten familiar with my eco-developer and how it behaves with the eco-bleach, so if you choose a different kind of developer, you might have to do some testing with developing and bleaching times as well as with temperatures in order to achieve the results that satisfy you. And on another note, imperfections are oftentimes the greatest discoveries, so the testing period is a fun one to go through.

I ended up liking the look of the reversal image, when I used both vinegar and lemon together. These bleaching agents together resulted as a more “neutral” colour tone in comparison to the vinegar alone, which resulted as a more “sepia” type of tone. I also noticed the differences in using a less filtered lemon juice in comparison to completely filtered lemon juice. The unfiltered lemon results as little bleach spots in the celluloid, whereas completely filtered lemon juice achieved a more balanced and neutral image without the spotty effect. It’s also noteworthy to mention that you might want to let the eco-bleach sit for a while before processing the film to avoid extra air bubbles that will leave their imprint on the film image. I found higher temperatures (39-40°C) work better and I usually try to bleach the film at 40°C to achieve a better contrast image. All these decisions are up to the alchemist to decide and finding out the best way for you is just by trying out different things and pushing the process further.

Here shared is the current recipe I use for my own work. Feel free to try it and share it with others.